The ribbon-cutting ceremony of a new roller skating center started the ball rolling for the new deputy member of Lee County Sheriff’s Office. His first official designation was to escort Sheriff Carmine Marceno.

For a neophyte, this deputy is considered sought-after because, on the same day, he also served as a guard during The Lee County Sheriff’s Office Teen Driver Challenge. It was an event featuring the youth’s amazing driving skills through obstacle tracks.

You heard it right; the brave pup is an official part of the team, his designation – “Pets on Patrol Spokes-dog”. This explains why he can be seen in most events where an officer needs to be at hand.

Sounds totally cool, right? However, behind the composed and the firm bearing of this dog was a traumatic past. Chance is one of the few fortunate survivors of animal abuse. 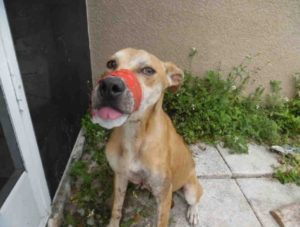 When he got rescued by the authorities, the pup had been seriously injured. The most enraging part was that his muzzle had been tightly taped. It was a clear sign that his perpetrator made sure that he won’t be able to cry for help while he was being battered.

Luckily for Chance, after recovering from all the injuries and wounds, he is now back in shape. Now, the traumas he incurred in the past will be all left behind.

Chance got adopted by his dog father Deputy Richard Castellon of the Sheriff’s Office.  What is in store for him is a life full of care and compassion with his new owner and the rest of the team.

On the other hand, there is an ongoing pursuit to find Chance’s offender. An approximate amount of $17,000 awaits anyone who can provide any useful information that can lead to the criminal’s arrest.

Dustin, The Rescue Dog Who Found An Important Job

Dog Deep: How To

How to Deflea Your Dog Quickly and Easily

If you’re a dog owner you’ve likely worried about fleas at one point or another. The scary part is, it’s pretty easy for your dog...

How Often Should I Walk My Active Dog?

Scared Puppy Found Tied To A Bench With A Saddening Note

Saving A Dog Trapped Between Boulders In The Woods