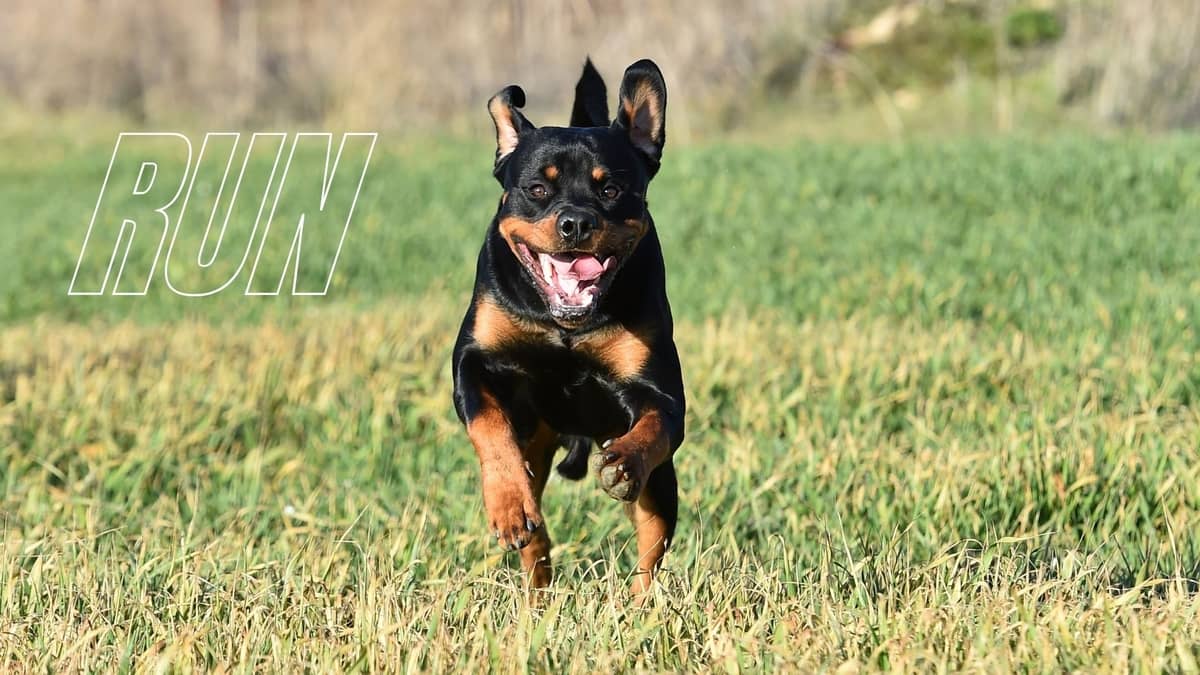 Rottweilers are well-known for their massive body and jet black looks of dominance. They are seemingly fearless dogs that can take on anything that comes their way. They have a tenacious yet weirdly compassionate nature, as well as an intense appearance and a corresponding huge and heavy build.

With such traits, it’s simple to believe that the beloved Rottie is a fast runner. Is he, however, who he claims to be? Or rather, who we say he is? Read on and find out how fast is a Rottweiler. You might be surprised.

How Fast Is A Rottweiler?

Rottweilers are very athletic canines with incredible natural endurance, strength, and stamina. These canines are sought after for a range of K-9 duties, including guarding and protection, as well as service and therapy dog work.

While the speed varies according to the individual Rottweiler’s fitness level, most can run between 18 and 25 mph. There will be slower and faster Rotties, but the majority of them will be in that range at top speed.

The normal dog can achieve speeds of 15 to 20 miles per hour, therefore the Rottie’s powerful body provides them a tiny advantage in terms of top speed.

Even though the Rottweiler’s highest speed may not appear spectacular when compared to other fast canines like the Greyhound, which can achieve speeds of up to 45 mph, when compared to the average man’s speed of roughly 5 mph, it becomes very amazing!

However, just because they can sprint at such tremendous speeds does not mean they should. Your Rottie can sprint for a few lengths, but he shouldn’t be doing laps at high speed for hours on end because of his body shape and susceptibility to hip dysplasia.

Just because your beloved best friend can chase down and catch something that seems intriguing doesn’t imply he appreciates it or that it’s beneficial for him. Aside from his remarkable speed, there’s a lot more that goes into a sprinting Rottie.

Rottweilers aren’t the smallest canines, but they’re also not the tallest. These pups are muscular, with an average height of roughly 25 inches (63.5 cm) and a weight of around 110 pounds (50 kg).

However, their muscles aren’t just for show. In the past, Rottweilers assisted farmers and butchers by dragging large carts to market. That kind of labor necessitates a lot of muscle.

There isn’t anything in a Rottweiler’s history that requires them to have a speed specialization beyond their usual athletic aptitude.

Another feature of the quickest dog breeds is that many of them have long, narrow snouts, which allows them to breathe more efficiently. Greyhounds and German Shepherds are excellent examples of this!

Short-nosed or brachycephalic breeds have a far more difficult time receiving enough oxygen, which is an important part of the running equation. Although most Rottweilers have a long enough snout to be classified as brachycephalic, they are nonetheless at a disadvantage when compared to long-snouted speedsters.

At the very least, their legs are short in comparison to other dogs. Most people wouldn’t say a Rottweiler has stubby legs if they were sitting next to a pug. But, place them next to a long-legged spaniel or even a lab, and you’ll see the difference.

Long legs alone will not make a dog faster, but they can slow a dog down if they are too short. A giraffe’s immensely long legs, for example, do not imply that it is swift.

So, rather than length alone, length and leanness compared to the rest of the body are the most important factors. Rotties aren’t the best runners for anything other than sprints, thanks to their thick, strong, and rather short legs.

Running is clearly not your Rottweiler’s favorite pastime. This may come as a surprise, given that Rottweilers are very energetic dogs who would rather spend their days bouncing around outside than caged up indoors.

Consider the last time you saw your favorite Rottie out in the yard. Did he decide to flee? Have you ever seen your Rottweiler actually run? Do you notice that if you take your Rottweiler for a jog around the block with you, he poop out earlier than you’d expect? This is most likely owing to the fact that Rottweilers dislike being held.

This has nothing to do with the Rottweiler breed’s size.

In fact, it might surprise a Rottie owner. Larger dogs enjoy running around all day and night and receive a lot of enjoyment from it, but your Rottweiler is a separate breed with a unique brain and set of likes and dislikes.

Rottweilers are capable of doing pretty about anything, including running. Their large frame and powerful muscles, on the other hand, render them more adapted to sprinting over shorter distances than long-distance endurance running. That means they’ll become fatigued soon and won’t enjoy long-distance running. 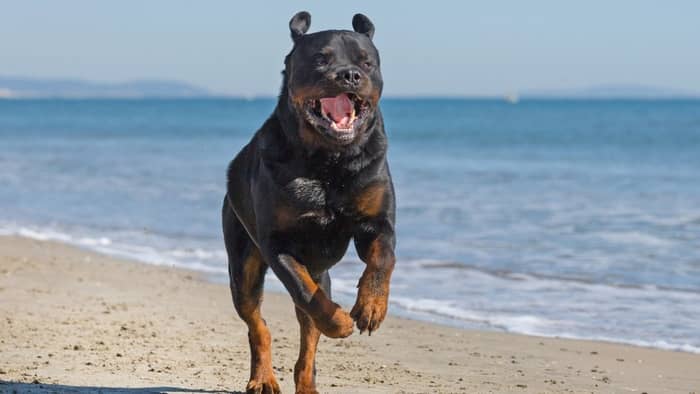 Of course, each dog is unique.

If you have a Rottweiler that can keep up with you on a run along the coast, go ahead and do it. Whether your Rottweiler enjoys running or not, there are a few health considerations to keep in mind.

Remember, Rottweilers are recognized for their bravery, devotion, and desire to please their masters. These are all excellent characteristics, and just a few of the numerous reasons why we adore our Rottweilers.

However, in rare circumstances, Rottweilers will go well beyond their abilities or comfort levels in trying to please you, which can be very hazardous. Depending on the conditions, this could result in pain, discomfort, and even heatstroke.

It is your responsibility to know your Rottweiler’s boundaries and to make sure that if you do go running, you do so safely.

Just as you wouldn’t expect to see massive bodybuilders at a marathon, the bulky Rottweiler would not be expected to make the list of the top endurance runners. However, if you look at any sprinting competition, you’ll note that the competitors are typically highly muscular—similar to the big Rottie!

So, long-distance running isn’t an option for Rottweilers as a primary source of experience. But there are still lots of additional exercises to choose from! Your Rottie might enjoy other forms of exercise such as swimming, yard games, and pulling carts.

How far can Rottweilers run?

At a moderate Rottweiler speed, a medium to large Rottweiler can run roughly two miles without difficulty.

Is it good for Rottweilers to run?

Just like all dogs, Rottweilers need some form of exercise and a run is a good way to exercise. However, due to their Physiology, they aren't able to run for long distances so keep that in mind so as to not strain them.

How much running does a Rottweiler need?

Each dog is different so consider factors like age when trying to figure out how much running a rottweiler needs. As they get older, Rottweilers will need less exercise. For example, an older one might need about 30 minutes of exercise.

Are Rottweilers good for canicross?

Rottwelers are not the best running partners when it comes to long distances. They do not have the endurance to run for long distances but they will do well on short distances.