Home All Dog Deep In One Glance, Welfare Office Knows He’s Keeping The Dog He Rescued

One day in Albuquerque, a woman brought 3 dogs into the city’s Animal Welfare Department.  It was explained that the dogs needed to be put down so she’s surrendering them.  When asked why, the woman said that one was poisoned and the other two were shot.

Packed in a broken crate, the dogs clearly needed some help.

Adam Hevey, an avid animal welfare advocate and officer of the shelter, was assigned to handle the situation and was appalled and horrified when he saw the condition the dogs were in.

Though all three dogs badly needed help, Hevey was particularly moved by one of them, Marzipan.

While the two dogs kept barking and beating around because of panic and pain, Marzipan sat still in their middle and looked straight to the officer who, at that time, was documenting the case. There was something strange that made Hevey feel connected to the well–behaved dog, and he couldn’t explain what it was.

The dogs were immediately brought to the department’s veterinary staff and got treated for their injuries at once.  Even with her current state, Marzipan showed excitement of meeting new friends, and willingly greeted them despite her immense pain.

“When she was removed from the crate, she walked up to me and the vet staff.  She wagged her little bobtail every time she sees me,” said Hevey.

After thorough examination, it was resolved that Marzipan was shot in the head twice, and to avoid complete shock, the team started administering fluids and pain medications followed by antibiotics.  Afterwards, Marzipan was put under sedation to get her wounds cleaned and treated properly. 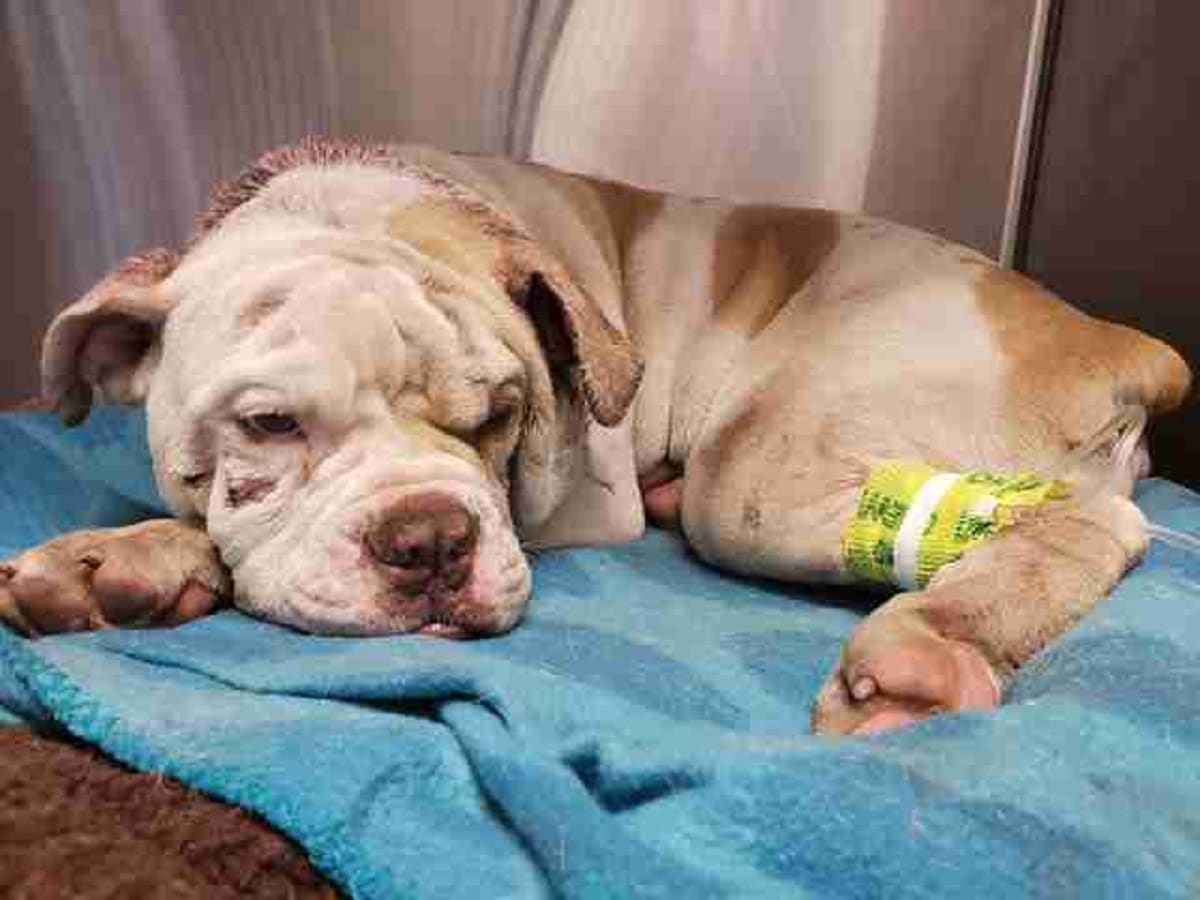 The 2 other dogs have been treated as well and are doing great right now.

While recuperating, Marzipan was constantly in Hevey’s mind.  For some unknown reason, something about the dog’s story moved him that it was just impossible for him to take her off his head.

He’d always find time to visit the sweet dog and eventually began taking Marzipan out of the treatment area for her bathroom time.

And when she was healthy enough to be released and go under foster care, Hevey took no chances and volunteered to be her foster dad – from then on, he knew that having Marzipan will be for good.

Even with the sight and hearing loss on the left side caused by her injuries, Marzipan didn’t slow down.  She just loves being in her new home and enjoys playing with Susie, her dog sibling.  She’d steal socks and chase tennis balls. 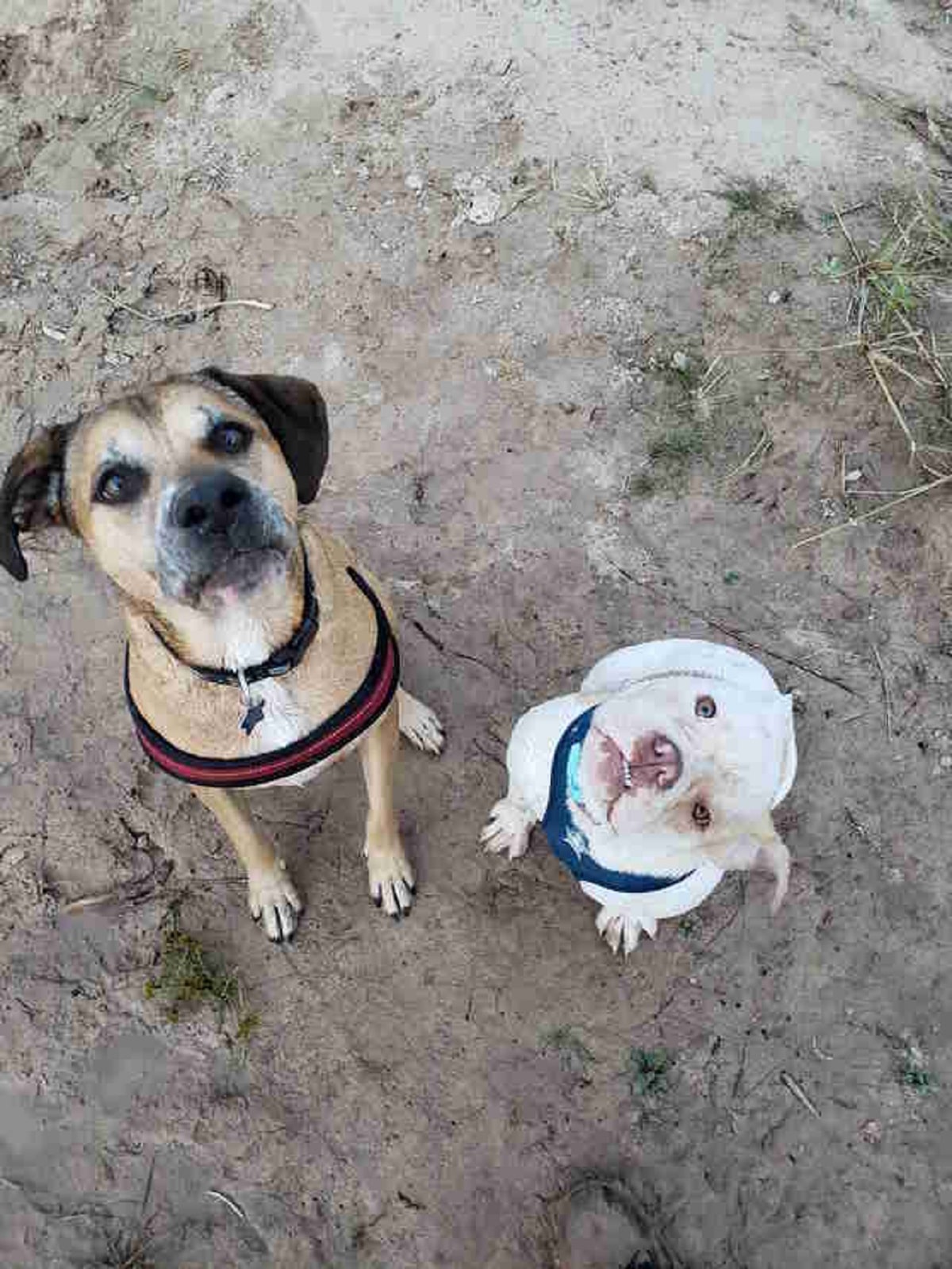 Marzipan’s rough past is now behind her and Hevey, now her dad, is delighted that things ended the way it did.

“In that first eye contact, Marzipan embodied every sad story and awful situation I have experienced.  She made every time I have lost sleep over the suffering of animals I have witnessed into her own form and made me realize that I was doing the right thing.”

Photo Credits to Adam Hevey via The Dodo

Tiny Dog Obeys A Command With A Stuffed Toy In His Mouth, Proving That Puppies Are Adorable No Matter What They Do

Corgi Stuns Its Humans With An Incredible Skill That Made Them...

In life, there are moments when we accidentally showcase our skills to our loved ones. It turns out incredibly well, and it ends up...

Tiny Dog Obeys A Command With A Stuffed Toy In His...

Pitbull Dumped By Breeder After Giving Birth Gets Another Shot In...

A California Man Tackled And Punched A 350-Pound Bear To Save...

Pitbull Jumps Inside A Truck To Take Refuge From The Heat...